More
Who in the world are we???

The civil war started in April, 1861 after the attack on Ft. Sumter.  President Lincoln immediately ordered up volunteers from each loyal state.  Each state, based on population, had a quota to meet.  Pennsylvania's was 29 regiments - or, 29,000 men and officers.  The cry was heard load and clear and some 43 regiments were formed from the keystone state.  As a result, the 13 regiments left over were called "reserves".  We were then placed under the command of Gen. John Reynolds of Lancaster (photo at right).  After the "great skedadle" of Bull Run, the "Reserves" were placed in active duty as 3 year units.  From the word 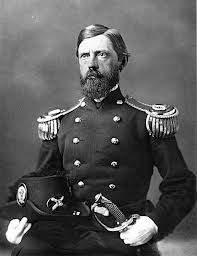 "go", the Reserves distinguished themselves.  They broke up a smuggling ring in August of '61, for which they were given commendations. And Company D went behind enemy lines and captured a Rebel spy under the command of Capt. Hess for which we received accolades from the General!  And when spring came, they became the "spear point" of the new Army of the Potomac under McClellan.  During the "Peninsula Campaign" our boys fought against some of the best the Confederacy threw at us - like Longstreet and Jackson.  Our 1st captain, George Hess, was wounded by an artillery shell at City Crossroads, Va. on the 28th of June, and died in Richmond on July 4th.  He is currently buried in the center of his hometown, Conestoga, Pa. (along with many of his fellow men).  We fought at Antietam, Gettysburg, Fredericksburg, and many other battles.  Thanks to Gods grace, our enlistments were up just before Cold Harbor and we mustered out.  Whew!  Just in time!  The one battle that Grant ever admitted was a mistake.  The casualties were horrific.  The company returned home and retired our colors, (one of which we had just received about a month before mustering out) to the State House.  A good number of our men reenlisted and joined up with the 190th, which by then, most likely never saw action.

The 1st Pennsylvania is still looking for new recruits.  We are also in need of civilians to do impressions such as: nurses (males- hospital stewards, females -nurses), medical surgeons, chaplains, undertakers, gentlemen and ladies of leisure (or politics).  You do not need to have any knowledge of military matters (any more than the men of the 1860's did).  Now, to answer a few immediate questions. . . . The first one is usually: "what's the cost?"  Actually, you don't need to spend a dime to get started.  We have "loaner" uniforms, tents, and guns to get you started.  For your first couple of events, you will be our guest with no cost to you.  If you find you like it (or LOVE it), then you start "picking at it", spending money as your resources allow.  There's no great hurry to rush and buy a gun.  Guns are, however, our shortest supply, and the sooner you get one, the better for the next guy.  Second question: "how much time do I have to spend at this each year?"  Answer: whatever your schedule allows.  We don't care if you show up for one event or all of them.  But usually what happens is that, once "bitten" by the "bug", you can't wait to go to the next event. Third 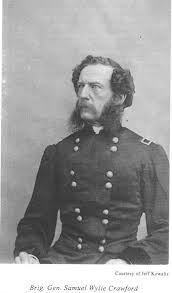 question: "what do we eat?"  Why, hard tack and salt pork of course!  No, only kidding!  Actually, when we eat by company, we usually eat very well.  From bacon & eggs, to roasted chicken or beef stew.  "The sky's the limit" when it comes to food.  It depends on the general consensus prior to the event as to what we eat.  At the events where cooking is by individuals, you bring your own "provender" and eat what and when you want.  Last question (you'll have more later, I'm sure): "can I receive a rank?"  Absolutely. . . in time.  As in the regular army, rank comes with experience and ability.  The more time you spend at this hobby, the more the rewards.  Simply put, we don't need any sergeants sitting home watching football while we're engaged in battle at an event.  As for becoming an officer, the chances are less likely.  Unlike the real war where men died and were replaced from the ranks, here death comes less frequently.  And as for me, I plan to live for a good many years yet, as I'm sure, Lt. Cornwell probably feels similarly.

So, what are you waiting for?  Go to our contact page and "shoot off" a message to me and get ready for the time of you life.

Oops! This site has expired.

If you are the site owner, please renew your premium subscription or contact support.